Money laundering is a type of cancer. As a result, the scope of our national economy is shrinking. Although the government has set up a legal framework to overcome this situation, there is a lack of goodwill to implement it. Therefore, effective amendments to the law to prevent money laundering and increase to the capacity of the concerned institutions are necessary. Financial institutions must be allowed to operate independently without fear. At the same time, there is a need to increase the efficiency of organizations like the ACC and the NBR. Various foreign financial institutions, including Switch Bank, should agree with the countries concerned on the amount of money laundered and the names of the traffickers. This was stated by Dr. Mustafizur Rahman, Honorary Fellow, Center for Policy Dialogue-CPD, as the Chief Guest at the Shadow Parliament Debate Competition on Political Accountability for Preventing Money Laundering with the participation of University level students of Tejgaon’s Bangladesh Film Development Corporation on Saturday, January 2, 2021. Chairman of Debate for Democracy Hasan Ahmed Chowdhury Kiran presided over the function.
In his speech, Chairman of Debate for Democracy Hasan Ahmed Chowdhury Kiran said that money laundering is the vicious circle of the country's financial sector. Although the government continues to take various visible steps to curb trafficking, it is struggling to control it. Businessmen and politicians as well as government officials have been accused of money laundering. The government and the ACC have promised to work actively, but political accountability must be strengthened to prevent money laundering.
Debate for Democracy raises 10-point recommendation in Parliament to curb money laundering. These include amending the Prevention of Money Laundering Act 2012 to bring money launderers to justice in special tribunals, Eliminate legal barriers to disclosing the names and addresses of money launderers, Ensuring good governance in the financial sector, To take steps of the Election Commission regarding the politics or money laundering in the country, Creating all-party political unity to prevent money laundering, Separate cells to bring suspected corrupt people who have acquired citizenship in other countries under the law, To publish the list of names of those who have gone abroad through money laundering and corruption through investigation, To create mass uprising at all levels against the corrupt and money launderers, Strengthen state agencies to curb money laundering and create an investment-friendly environment by removing the bureaucracy of private investment in the country.
Opposition party Primeasia University defeats Government team Northern University Bangladesh in the debate competition. At the end of the competition, crest, trophies and certificates are awarded among the participating teams. The judges were Prof. Abu Muhammad Rois, Dr. SM Morshed, Dr. Shah Alam Chowdhury, Journalist Kaberi Moitrayo and Daulat Akter Mala. 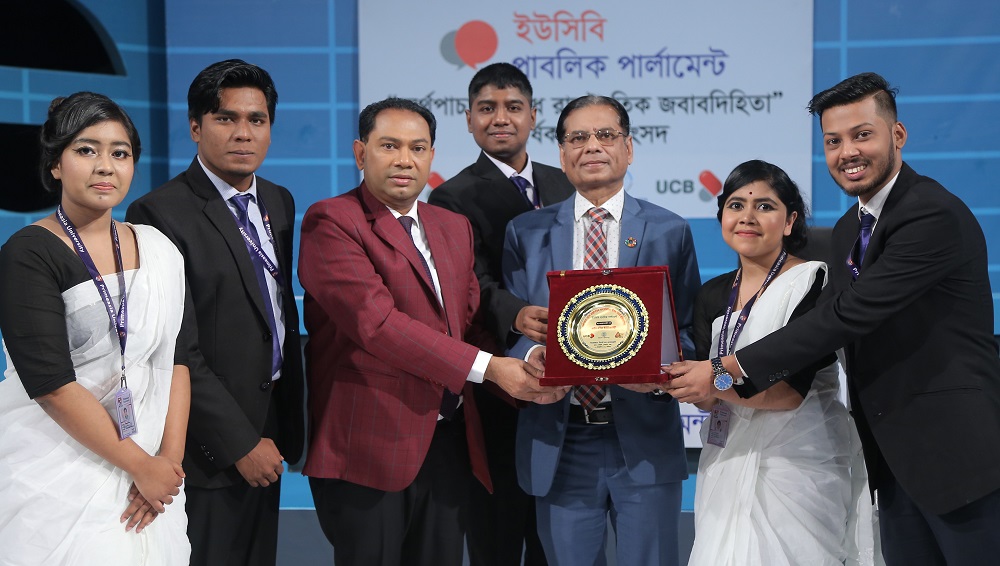 Caption 01: Honorable Fellow of CPD Prof. Dr. Mustafizur Rahman and Chairman of Debate for Democracy Hasan Ahmed Chowdhury Kiran are giving a crest to the debaters of the winning team- Primeasia University in the anti-money laundering shadow parliament debate contest.